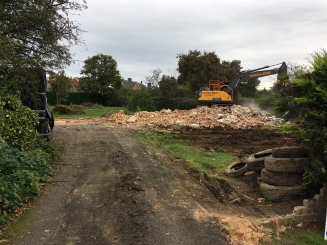 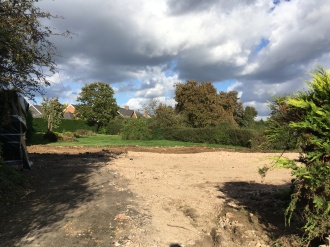 Update: 1 September 2017
After due consideration, and despite widespread objections, the planning committee approved this application following adjustments to the height and nature of the front boundary. It is also regrettable that, when considering applications in Biddenham for demolition and replacement with larger properties, officers now regularly cite the existence of previously approved large developments in Main Road and Biddenham Turn as justification, even though ‘precedence’ is not recognised in local planning law

Planning application 17/01738/FUL
seeks approval to demolish the existing property at 8 Main Road and replace it with a new dwelling of substantial size and contemporary design.

The replacement would have three floors against the two at present, with a prominent double depth crown roof and a footprint three and a half times the existing.

The architectural style and mass are not replicated in other properties on Main Road, which is more typified by single houses of varying character which do not detract from their surroundings.

The roadside boundary of the site fronts the Biddenham Conservation area, and any development will therefore have a significant impact on the special character of this pretty part of Biddenham, and on the setting of the grade 2 listed building opposite.

The society believes the proposed replacement building is not contextually appropriate in respect of size, scale, massing, architectural character, relationship with nearby buildings, and alignment and treatment of the setting, and has recommended that planning permission is refused.